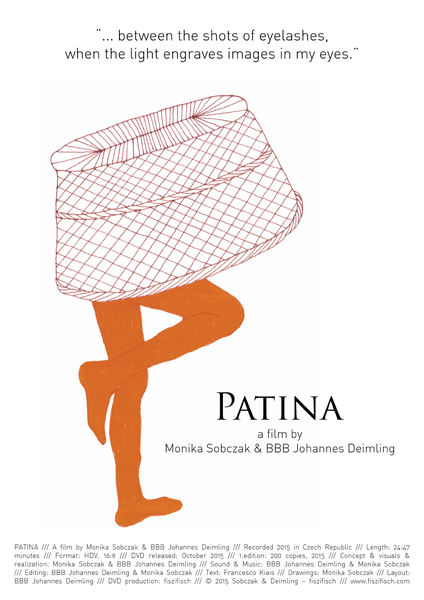 “There are not still images”, -seems to say a slight figure, with long yellow legs, who crosses the framed image-, “..but only still gazes”.

In a continuous framing the existing, framing the object in a territory between photography, performance and video, Monika Sobczak and BBB Johannes Deimling compose and frame up still images letting then things, nature and our own existing happen in it. The stillness of the images is broken through a playful illusion, in a delicate way of seeing, perceiving and projecting images.

For our visual habits, as lazy perceivers of thousands of images in our everyday life, 'PATINA' is a play of disappointments, because it activates something that goes beyond the passive exercise of the perceiving. That which 'PATINA' activates in its series of images, is an illusion, - meaning in-lusio/in-ludere –, namely an "involvement in the game" of the seeing.

Seeing, and not just watching.

The dream of a child god.

Time and photography are intimately bounded. Like a child, the photographer can choose what s/he will take out from the flowing of time, and fix it in an image for the eternity.

Eternity had, by the ancient Greeks, the aspect of a child god playing with the destiny of the universe. Today, a new child god ideally collects and plays with all destinies. In the virtual world of the Network, in fact, we concentrate our entire knowledge, all our virtual identities and the images of all things, so that we actually participate at the look on the world through the Net, being constantly teared away from the attention to the real, away from the possibility of dwell in the "here" and "now."

How to find, then, for us and our vision, a possible position in the flow of time, in the experience of the space, if they suddenly become so real and fragile, out of the child-god's dream? We remain clinging to his dream, until we decide to remove ourselves [de-ludere] from his play, for to live our own illusion of the present.

Let's follow the slight figure with long yellow legs, and see where she takes us.
Out of the dream, into the play.
Following a path of images.

Clashing two hammers in front of his eye, the male character ideally obstructs the possibility to see. Behind this metallic eyelashes, the world temporarily disappears. Like when we close our eyes. Like when the click of the camera shutter separates us from the flow of life, without sight.

That's why we cling to the objects, like the female character does swinging with the coat hanger.

We cling to things, to be able to perceive and feel our own existence, and to remain a presence in the present. Framing the moments, suspending the time, the female figure lets happen this complicity between a biological being and inanimate matter, in an unusual dance, giving back the delicate and intense strength of a non-conscious, but constant falling in love for life, even in its absurd transience.

Then, each still order must be brought to a sonorous chaos, and every sedated beauty, must be awakened.

In her images, she oscillates with the objects between one beat of the hammer, and the other. She swings between the agitation of the still-alive moth and its imminent end. And we swing with her between lifeless matter - which imposes, ideally and physically, a kind of noisy clash with our senses, for to be perceived and experienced - and the feeling of duration, and of inexorable beauty of nature, which leads to silence and listening.

We swing together with the two humans, between objects and immateriality, darkness and light, so that the eyelids-anvils always return to separate themselves, for to distance ourselves from the total absence of experience able images, -which is the silence in the dream of the child god, and namely, eternity.

Swinging illusions.
Nourishing the soul, not the gaze.

“I nourish myself of the moment,..” – seems to say the figure with long yellow legs to the male figure who lives in the shadows, making a rope rotate over his head, - “..between the shots of eyelashes, when the light engraves images in my eyes”.

She shows the things, letting them become the counterweight that keeps us from falling, while we swing between a rational 'staying away' in contemplation, and the emotional living and feeling what we see.

Through things and gestures the players reset our knowledge of objects, re-signifying them, and then, re-objectifying us. They bring us back to an ideal starting point of the vision. Like the force of gravity which brings us back to the ground. Like the death of a moth which keeps us alive. Like the impossibility to feed ourselves of the objects placed in the dish.

We are always contained by what we perceive: from the circle of the dish, from the perimeter of the room, from a wardrobe, from the perspective of the lines marked on the floor of an attic. Only a metamorphosis can save me from having to feed my lazy and passive way of perceive. Only leaving the nest of the framed vision, I can learn how to fly out of it.

To the figures that break the immobility of the still image, I can delegate the exercise of my freedom. This is the metamorphosis, - if you can see when you're watching.

Then you will fly like a swallow, fall like water, trembling like many reflective surfaces, and maybe you will die a little with the moth, marking points in the air, like a Brail alphabet for they who are watching, and which cannot see.

The hammer falls and destroys. We have definitively left the dreaming of the child-god, now. A metallic eyelash falls on the reality breaking the circle of the dish, - namely the static perfection of a still perception. “There are not still images”, - repeats the slight figure, with long yellow legs -, “..but only still gazes”.

Once broken the circle of stillness, the image becomes color, sound and noise, lightness rolling without a reason down the stairs, body pending/feeling/playing in its powerful frailty.

The two figures take asymmetrical positions to each other creating a sort of dialog, and playing in the framed stillness.

Then you can find in a wardrobe many little spheres, falling like memory fragments, or maybe wishes, freely flowing out of the wardrobe of our remembering, or feelings. A hand, at the end of the room, holds the key of another door. There is always the possibility of a way out from the frame, be it mental or visual.

In a dark space, the male figure on his knees, throws a white powder in the air which falls to the ground. Suddenly, the faint light, gains strength, drawing a firm line on the ground, which ripples and enriches itself in shady streaks, when it meets the person kneeling on the ground.

Is this not a metaphor for the human being? A slight streak of light and shadow, in the luminous continuity of the time.